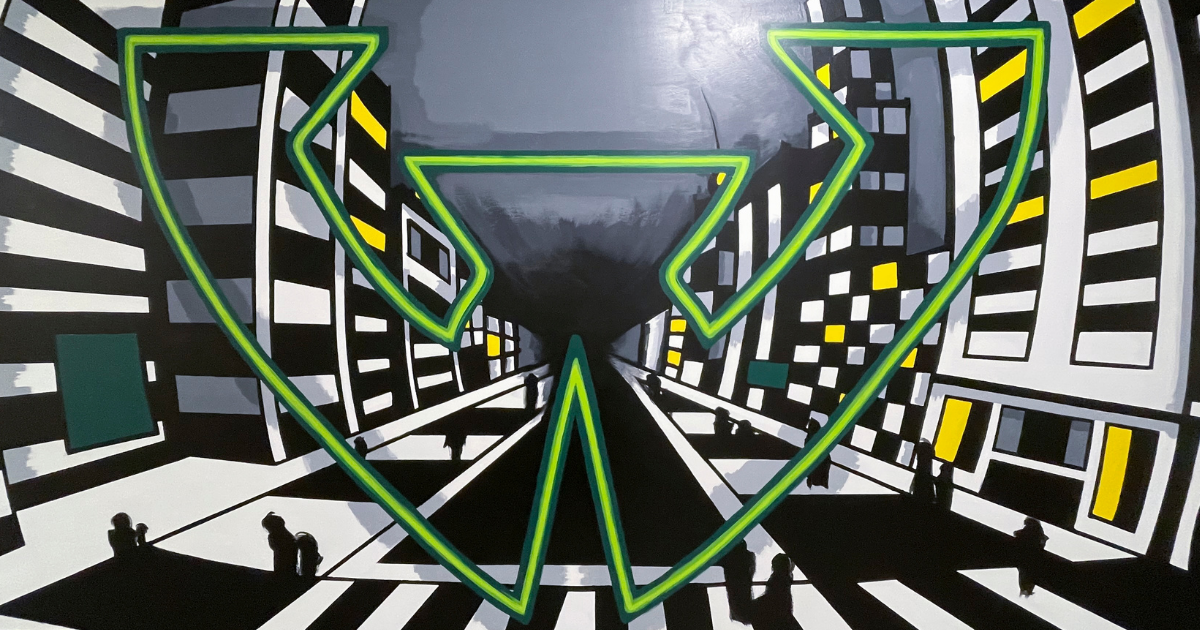 Those who visit Wayne State University’s Mike Ilitch School of Business enjoy the iconic view down Woodward Avenue, but that’s not the only bustling city scene you’ll find here.

A recently completed mural, Pace of Wayne: A Window of Opportunity, resides within a busy student hallway on the third floor. This downtown perspective centers on a symbolic “Warrior W.”

The city scene is a nod to the Ilitch School’s proximity to Detroit’s business district, says artist and Wayne State student Enna DiDio.

Enna Didio, a rising senior majoring in drawing in WSU’S College of Fine, Performing and Communication Arts, said being raised and attending college in Detroit had a major impact on her work and made it more personal.

“I wanted it to look progressive, like time is moving forward, like there's movement to the piece,” Enna DiDio said. “It’s the pace of Wayne State and the pep of the city and school.” 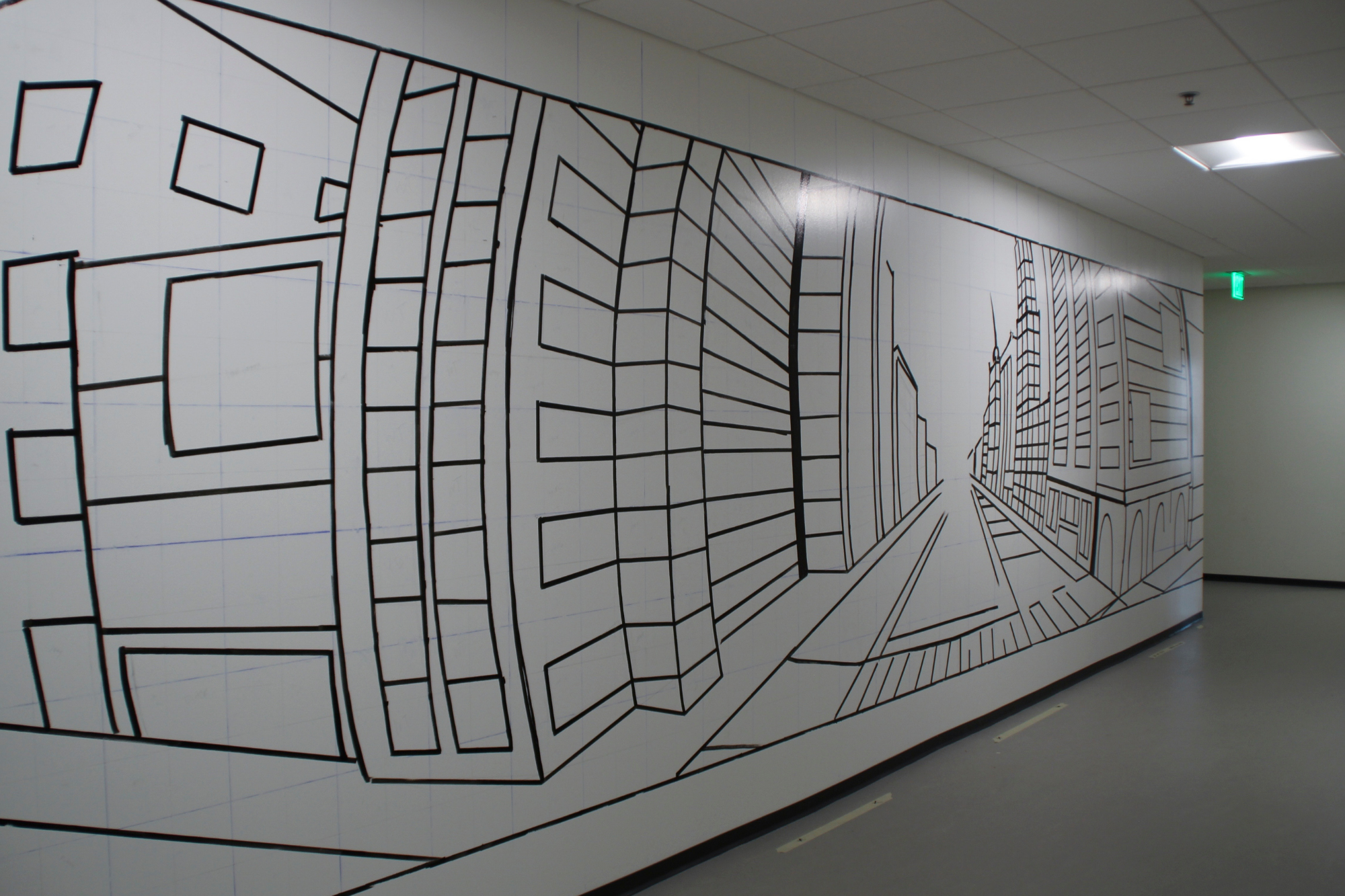 The mural also incorporates some brand traits of the Ilitch School that were established through its partnership with Gyro Creative Group. Gyro, a Detroit-based strategy and design collective for brands, worked with the school to hone a brand identity and story during the process of its renaming and the construction of its new home, which was completed in 2018. That brand development work was led by Gyro’s founders, Matt DiDio and Angela Topacio-DiDio—who also happen to be Enna’s father and stepmother.

While giving the DiDios a tour of the new building and reviewing naming opportunities, Ilitch School Dean Robert Forsythe stopped by a large, blank wall on the third floor and asked them to help choose a muralist … preferably with strong ties to Wayne State.

“I’ve worked with many muralists, but none of them went to WSU,” Angela Topacio-DiDio said. “We thought about it for a bit and realized that we had an artist right under our noses and she's extremely talented and she actually goes to Wayne State.” 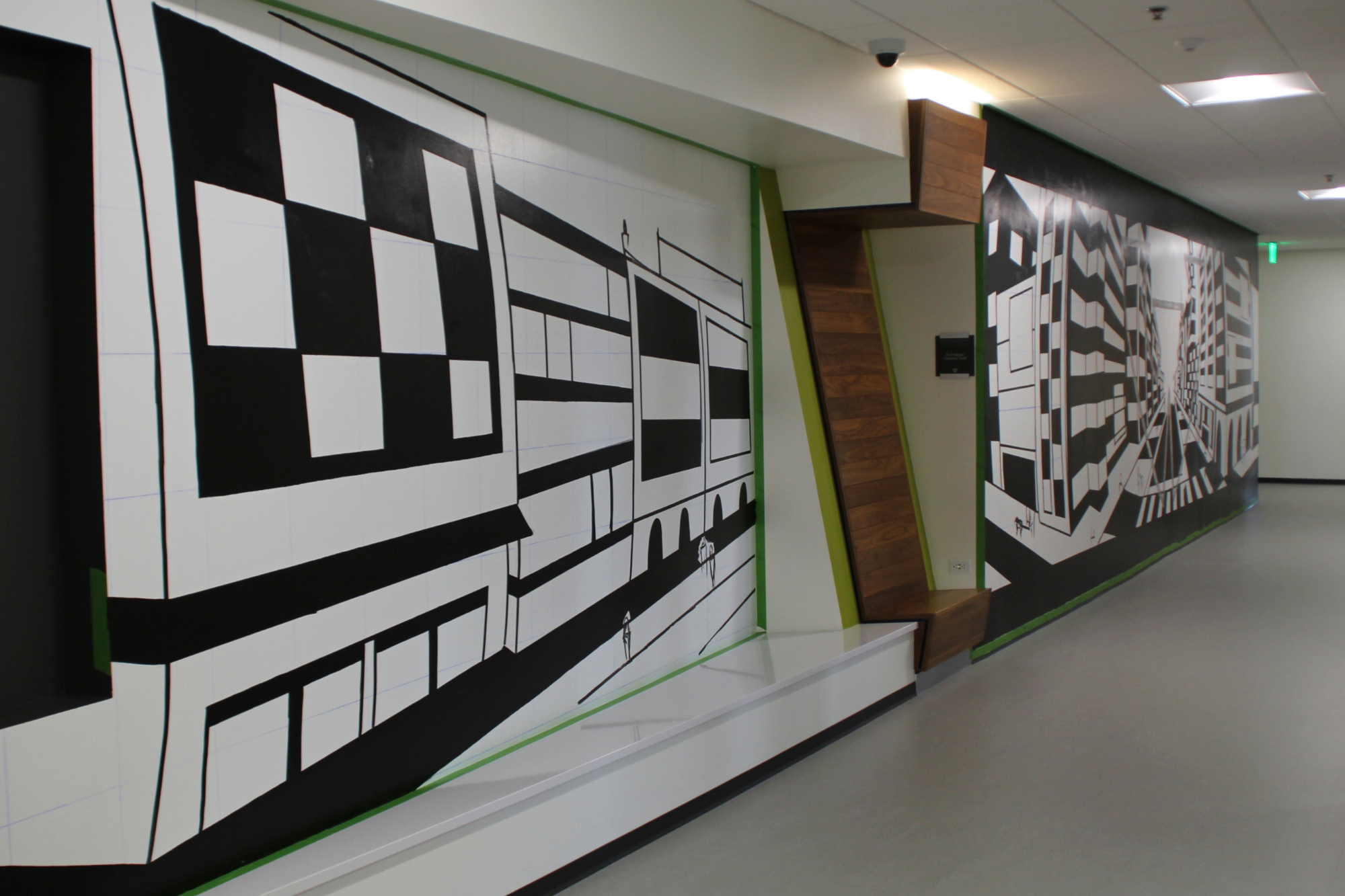 “When we sponsored that wall and took on Dean Forsythe’s challenge to get a mural done there, we were originally looking for prominent, local muralists,” Matt DiDio said. “But, after looking at some of Enna’s recent work, we thought, ‘How great would it be to have a Wayne State student do this piece?’”

The entire DiDio team was soon brainstorming ideas for the blank wall.

“The ‘window of opportunity’ concept plays off of all that glass in the building, being in the business district, and not having any boundaries on your imagination,” Angela Topacio-DiDio said. “It’s a look at downtown with an interesting perspective. It pulls you in so you can feel a part of it. I hope other students can be inspired by that.”

In addition to receiving course credit through an independent study for the mural, Enna DiDio says one of the most valuable parts of the experience was learning how an undertaking of that scale gets completed from a project management perspective.

“With the pandemic, we were going back and forth trying to coordinate safe access to the space,” she said. “The approval process started in January, but I didn’t start painting until the first week of August. After that, I spent a month and half just painting.” 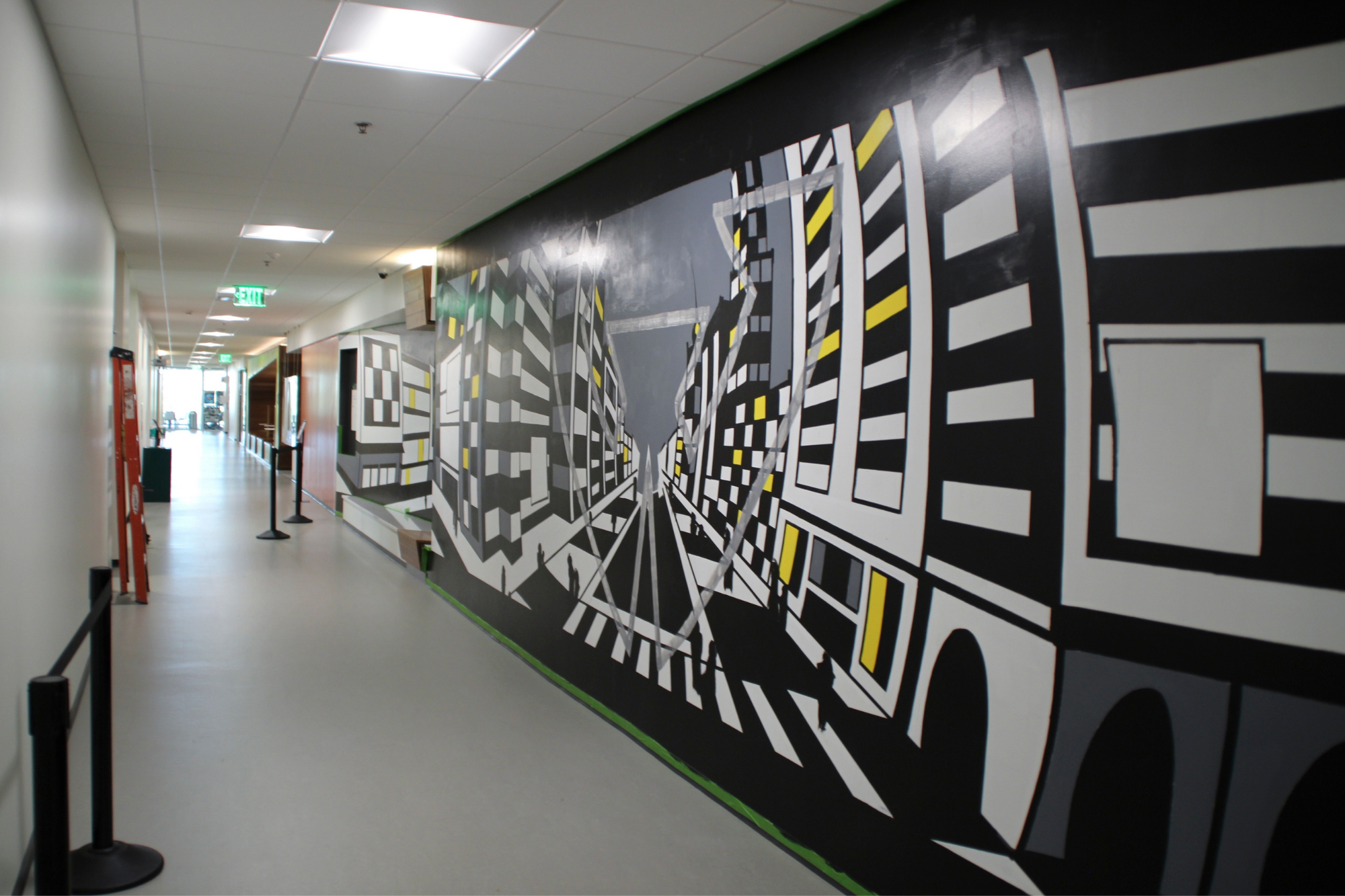 In addition to access issues related to the pandemic, the development process itself took a good deal of time.

“We went through a lot of back and forth before anything went on the wall,” Enna DiDio added. “It was very important to Dean Forsythe that it was just right.”

The final design features bold geometric shapes and a simple three-color palette intended to illustrate the grittiness and determination of Wayne State’s students and the industrial feel of the city.

While the mural reflects the Ilitch School, WSU and Detroit, Enna DiDio was able to add a nod to her own family: a small dog painted into the corner. The addition was a tribute to the DiDio family dog, a Weimaraner named Nigel, who had recently passed away.

Now that the long hours of preparation and painting are over, the response from students, faculty, staff and, especially, her family has been overwhelmingly positive. 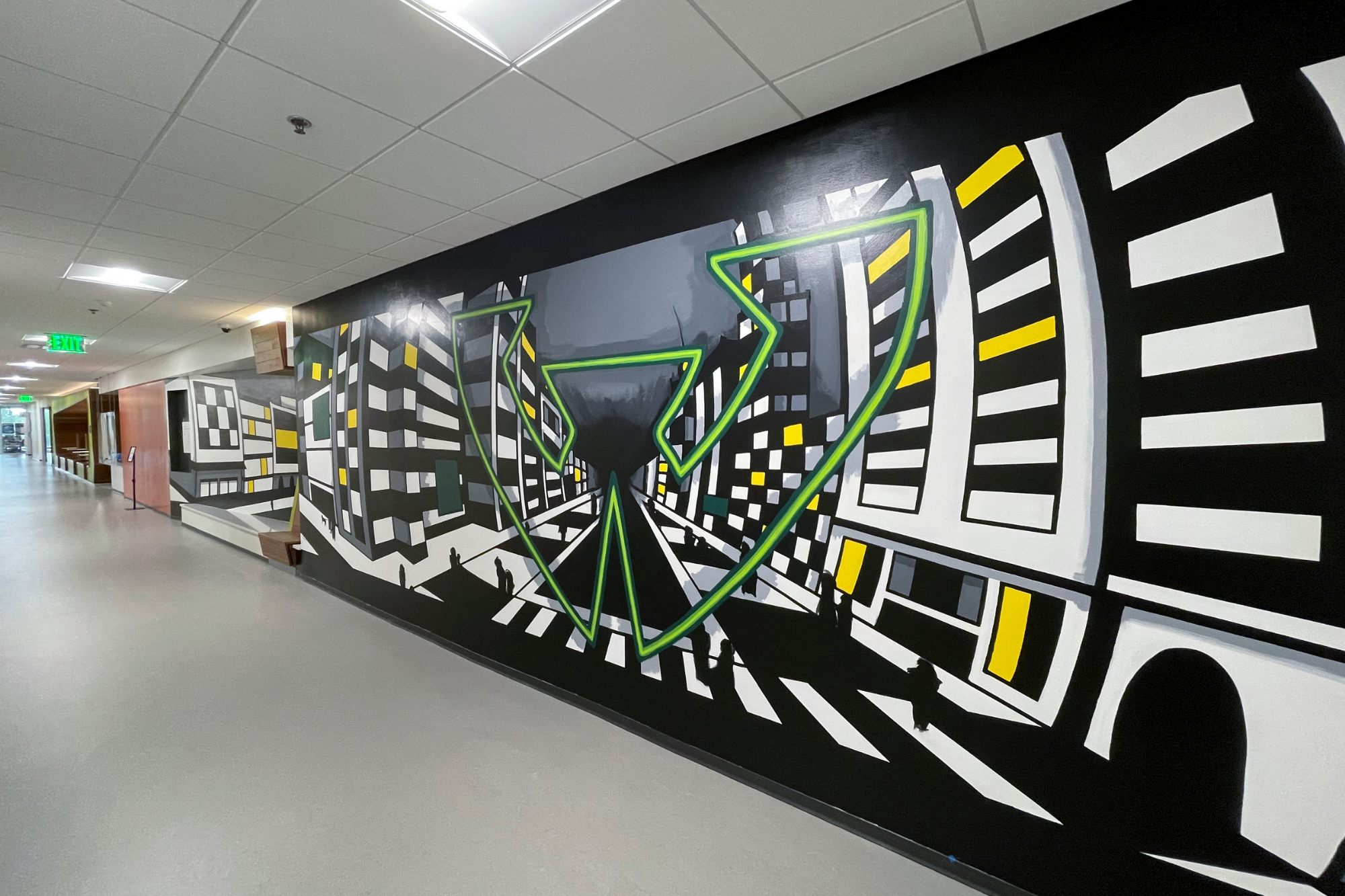 “As I was working, faculty and staff would come by and say they’re so excited to see it finished,” Enna DiDio said. “I wanted it to fit and be an extension of what the business school stood for, and so far, people seem to agree with my vision.”

The rest of Team DiDio couldn’t be happier with the finished product.

“The progression of the mural was pretty spectacular; it takes you in,” Matt DiDio said. “Hats off to Enna. I’m very proud of her, and I think it turned out really nicely.”

Matt DiDio, a WSU alumnus who graduated in 1983, actually took many of the same classes Enna is now taking for her own fine arts degree.

“She’s going to the same classrooms almost 40 years later, which is wild!” he said. “I had a riot at Wayne State. I was down there all four years and never left.”

Matt DiDio added that he’s pleased that his daughter is following in his footsteps, but isn’t all that surprised.

“She had a good influence of art with our art studio and Gyro growing up, and she got to know the city well,” he said. “As a little kid, I would take her everywhere—she knew everyone at Harry’s at four years old. She’s been a downtown girl for a long time.” 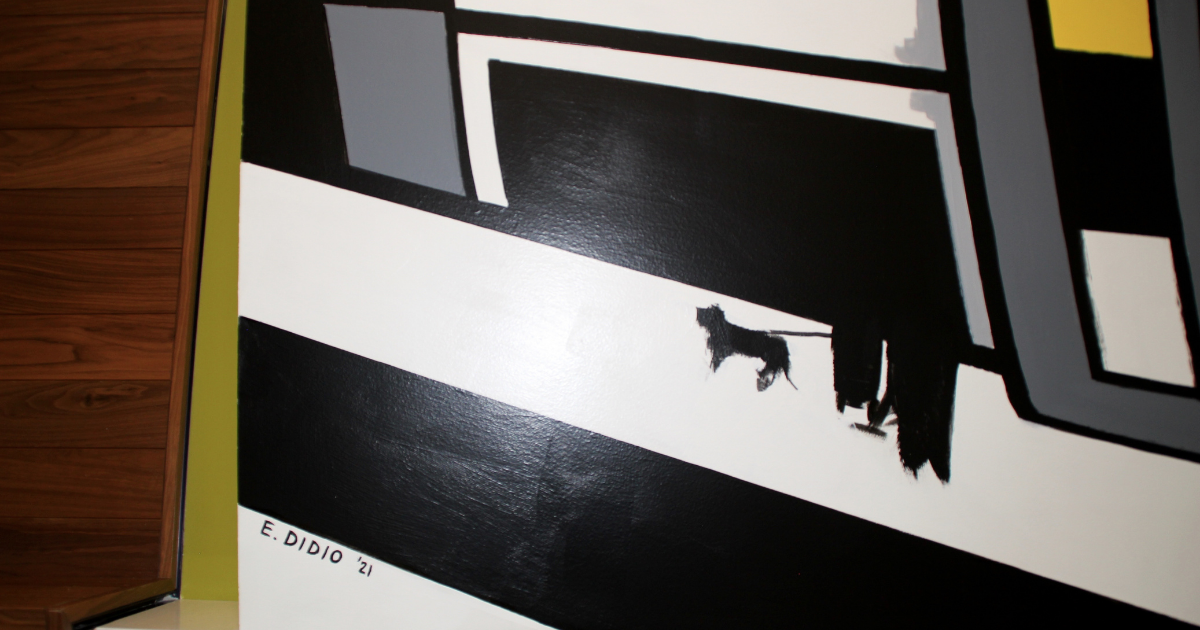