School named in recognition of Mike and Marian Ilitch’s $40 million gift, the largest in the university’s history 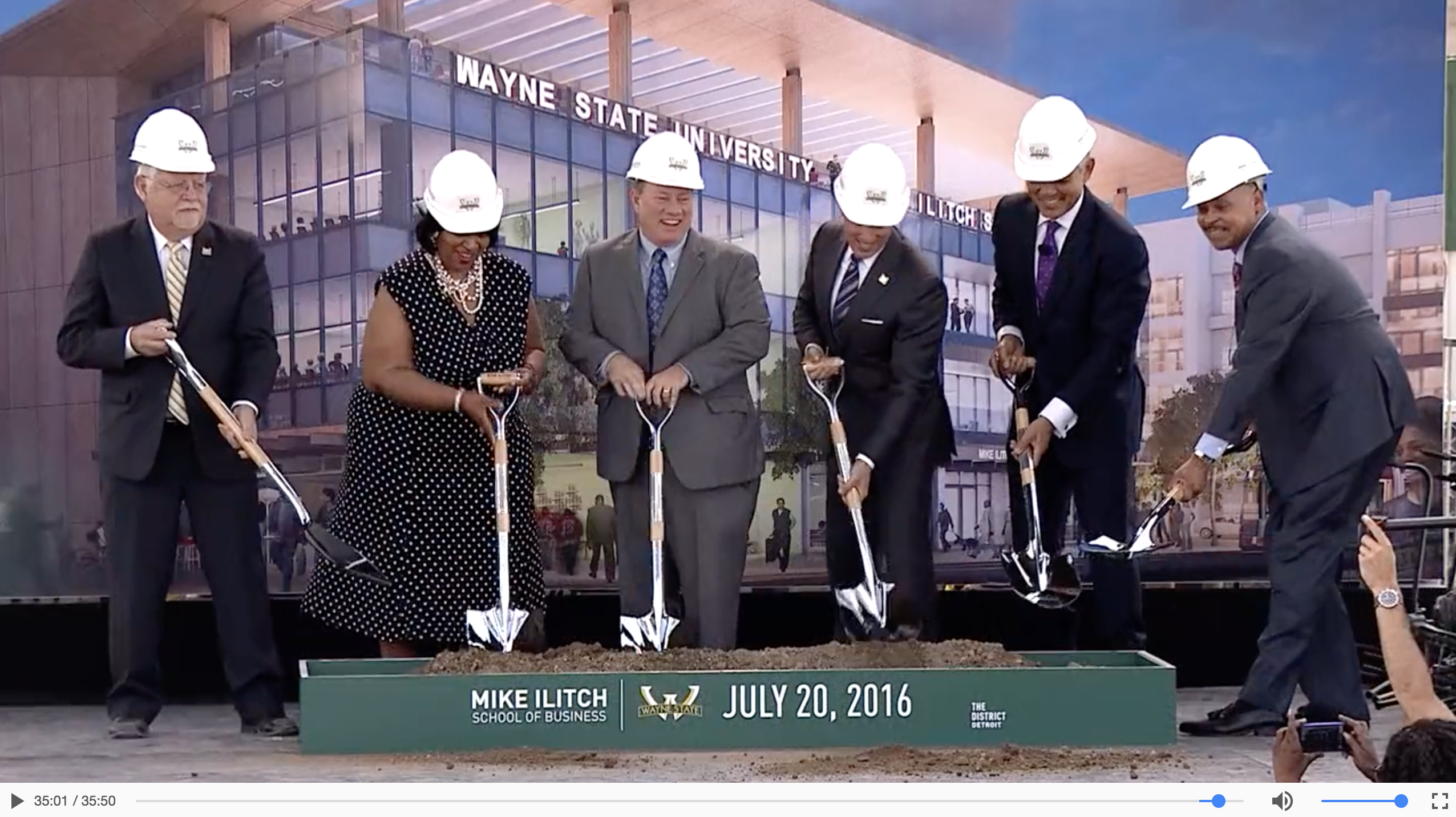 DETROIT – As Detroit’s historic comeback and development boom continues, community members came together today to break ground on the Mike Ilitch School of Business at Wayne State University in The District Detroit. New renderings of the building, made possible by a $40 million gift from Mike and Marian Ilitch, show a sleek, open and smart design that evokes energy, collaboration and innovation. The groundbreaking ceremony took place at the school’s future home on Woodward Avenue near the rapidly progressing Little Caesars Arena, where guests from across the city came together to celebrate a new era of business education in Detroit. 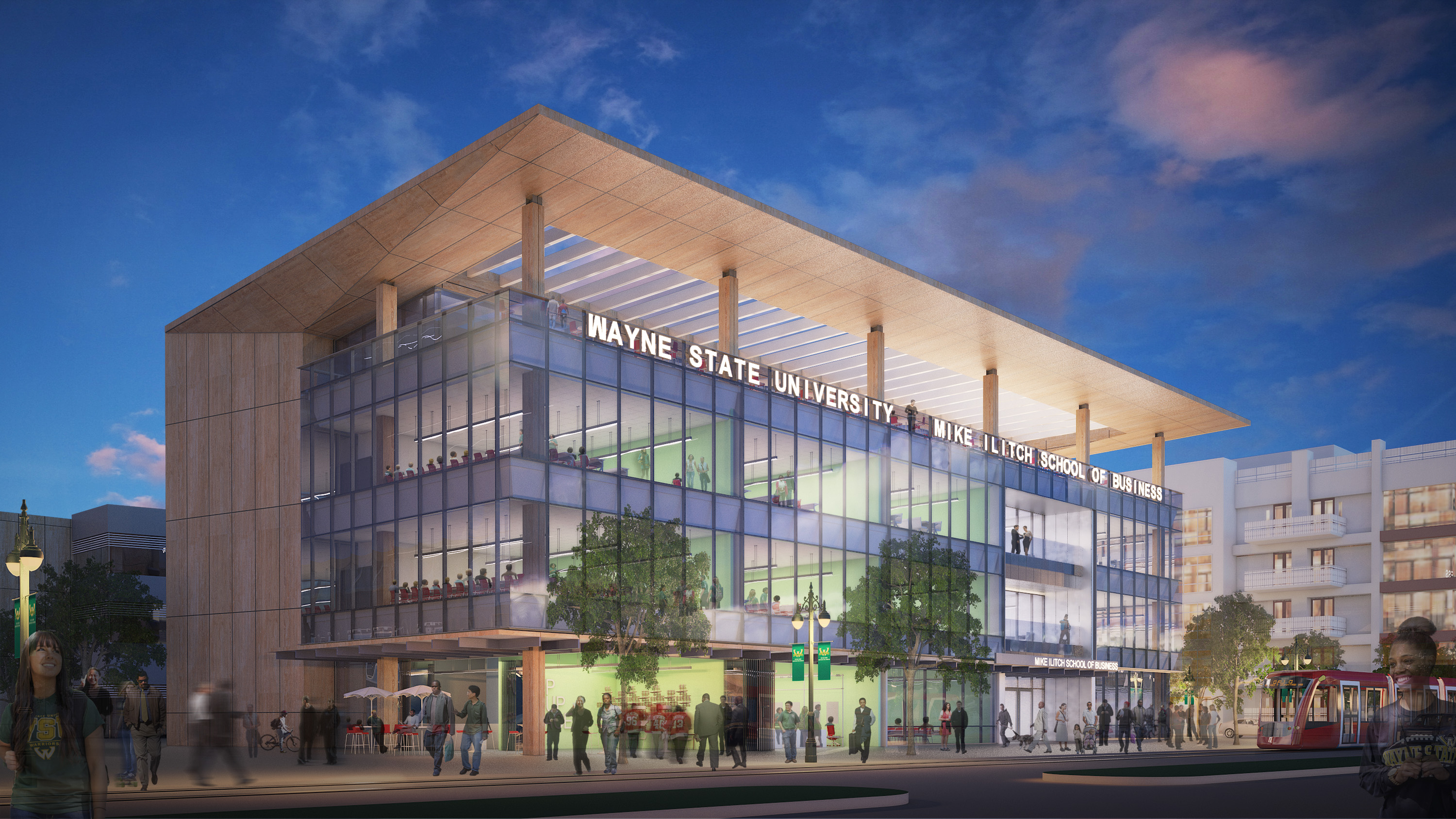 “The glass façade and design elements, such as the café and the indoor-outdoor spaces, make the Mike Ilitch School of Business both visually striking and inviting to the greater Detroit community,” said Wayne State University President M. Roy Wilson. “This new home for our business school will create a beautiful and accessible gateway connecting Midtown and downtown Detroit for students, faculty and the community alike. It’s a fitting and elegant design for a world-class business school made possible by entrepreneurs who throughout their career have been dedicated to opening up a world of opportunities for the people of Detroit.”

“Today's events represent the next important steps in bringing to life one of the most substantial demonstrations yet of my parents’ love for Detroit and its people, and their hope and belief in its future,” said Christopher Ilitch, president and CEO of Ilitch Holdings, Inc. “The new Wayne State University Mike Ilitch School of Business will shape tomorrow’s leaders for Detroit and beyond in an incredible new facility offering innovative programs, a signature location on Woodward Avenue and unmatched access to iconic Detroit companies.”

Detroit-based Christman-Brinker has been selected to be the Construction Manager for the new business school building. Detroit-based architectural firm Smith Group JJR led the development of the updated design for the new structure. The Detroit Downtown Development Authority earlier in the day approved a Master Development Agreement to move the project forward, with full construction expected to start later this year and the first students taking classes in 2018.

The selection of a Detroit-based construction manager and architect for this important project extend the ongoing Michigan Made, Detroit Built efforts taking place throughout The District Detroit. To date, more than $300 million in construction contracts have been awarded to Detroit businesses and more than $400 million to Michigan businesses as part of work on Little Caesars Arena and other projects throughout The District Detroit.

The Mike Ilitch School of Business will serve more than 3,000 undergraduate and graduate students and provide flexible teaching, research, office and community spaces for students and faculty bringing WSU’s outstanding business programs closer to the market. The school will boast a competitive entrepreneurship track with coursework in areas including sports and entertainment management. Major structural elements of the new building will include:

The new business school will be highly integrated with its prominent position along Woodward Avenue, featuring a number of innovative street level, sidewalk uses including a full trading floor, an open air classroom, business incubator pop-up and corner café.

“Excitement about the new building and what it will mean for our curriculum is already generating positive results for our school,” said Robert Forsythe, dean of the Mike Ilitch School of Business. “We’ve already seen a boost in applications as a result of the gift announcement last fall, as prospective students recognize the opportunity that comes from studying in an innovative environment and location like this.”

Mike and Marian Ilitch announced a $40 million donation to Wayne State University in October of 2015. The gift is the largest in the history of the university and ranks as one of the top ten gifts ever to name a public business school in the United States. The Ilitches’ gift is part of Wayne State’s $750 million Pivotal Moments fundraising campaign. It is a lead gift toward the construction of the new business school and the University will seek additional support from successful Mike Ilitch School of Business alumni and friends to complete the new facility as part of the Pivotal Moments campaign.

Wayne State University is a premier urban research institution offering more than 380 academic programs through 13 schools and colleges to more than 27,000 students. For more information about the Mike Ilitch School of Business, visit ilitchbusiness.wayne.edu.

About Michael and Marian Ilitch

Michael and Marian Ilitch are prominent entrepreneurs and philanthropists in southeast Michigan. The couple shares a commitment to developing and revitalizing the city of Detroit through high-profile investment projects and support for Detroit-based initiatives and organizations.

The Ilitches founded Little Caesars in 1959, and grew the company from a single storefront into the world's largest carryout pizza chain. This venture laid the groundwork for the development and acquisition of numerous other businesses and sports teams. Ilitch companies include Little Caesars, the Detroit Red Wings, the Detroit Tigers, Olympia Entertainment, Blue Line Foodservice Distribution, Champion Foods, Little Caesars Pizza Kit Fundraising Program and Olympia Development and Ilitch Holdings. The companies collectively employ over 21,000 people and have a total combined annual revenue of $3.3 billion.

Milestones over 48 years of investing in the city include: Little Caesars opening its first restaurant inside the City of Detroit in 1967; purchasing the Detroit Red Wings in 1982 and turning the then-struggling franchise into four-time Stanley Cup champions and one of the most respected franchises in professional sports; purchasing and restoring the historic Fox Theatre and adjacent Fox Office Center in 1987; purchasing the abandoned Hughes and Hatcher clothing store in 1987 and renovating it into what is now the Hockeytown Café and City Theatre; moving their Little Caesars world headquarters from the suburbs to downtown Detroit in 1989 during a time when most businesses were leaving the city; purchasing the Detroit Tigers in 1992 and providing the majority of funding to build Comerica Park in 2000; and opening MotorCity Casino in 1999 followed by expansion to include the MotorCity Casino Hotel in 2007.

Today, the organization is developing dozens of currently underutilized blocks into an exciting, walkable and livable sports and entertainment district. The District Detroit  will be anchored by a state-of-the-art arena that will serve not only as the new home of the Detroit Red Wings, but also as a platform for other sporting, entertainment and community events year-round.

With the completion of The District Detroit, the Ilitches investment in downtown will reach approximately $2 billion in brick-and-mortar projects. Ilitch companies currently employ over 7,500 colleagues in the city of Detroit, and annually attract more than 10 million visitors to their downtown venues.

The couple's unfailing love for Detroit has garnered them significant recognition for their generosity and vision for the city. The Ilitches have received numerous honors, including the key to the city of Detroit, presented to the family in 2008, as well as the National Preservation Award for the restoration of the Fox Theatre, a National Historic Landmark.

The District Detroit will be made up of a dynamic mix of sports and entertainment venues, including six world-class theatres and three multi-use sports venues – home to the Detroit Red Wings, the Detroit Tigers and the Detroit Lions. The District Detroit will also feature residential, office and retail developments that connect these venues into one contiguous, walkable area, where families, sports fans, entrepreneurs, job seekers, entertainment lovers and others who crave a vibrant urban setting can connect with each other and the city they love.

Data from the University of Michigan demonstrates that The District Detroit will ultimately account for an impact of more than $2 billion by 2020 and create 12,500 construction and construction-related jobs and 1,100 permanent jobs. More than $100 million in income from Little Caesars Arena alone is expected for Detroit residents, with significant additional income to be created through future private development. Visit www.DistrictDetroit.com to learn more.