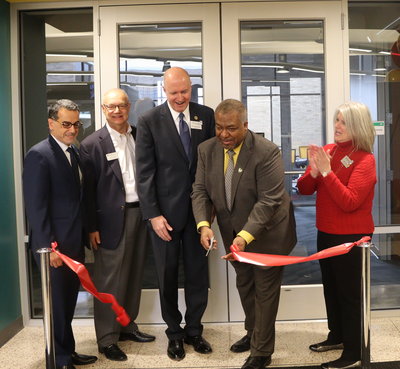 A new partnership between Jackson College and Wayne State University was celebrated Jan. 14 with a ribbon-cutting and the official opening of the Wayne State office on Jackson’s central campus.

Wayne State will begin offering classes from the Mike Ilitch School of Business at Jackson later this year, allowing students to pursue a bachelor’s in business from the convenience of the JC central campus on Emmons Road. The two institutions have the shared goal of expanding affordable, high-quality post-secondary degree options and now  Jackson County residents can benefit from this partnership and pursue their four-year degree in their community.

“We are excited to provide our students with a public institution presence on the central campus of Jackson College,” JC President Daniel Phelan says. “The addition of Wayne State University to the college’s University Center will provide students with an additional baccalaureate degree completion option. Students who would not normally pursue completion at WSU due to location will now be given the opportunity to maximize transfer credit, save money and stay in their home community. We are delighted to share the common goals of student access, success and completion with Wayne State University and look forward to expanding this partnership in the future.”

“As a public institution, we are thrilled about this new partnership with Jackson College because it will allow us to serve a new group of students that we haven’t previously reached directly,” Whitfield says. “Most of our partnerships are in the tri-county area, so this is a big and exciting step west for us. We’ve had great conversations with President Phelan and Jackson’s leadership team, and the idea of bringing a four-year business degree to this campus is exciting. We are proud of what we do in Detroit and we believe this partnership will be an asset in Jackson as well.” 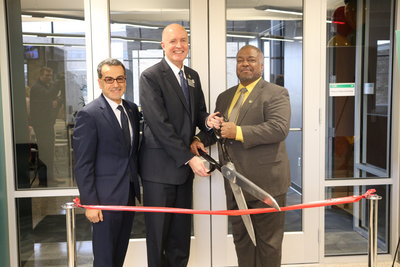 Jackson students can transfer up to 82 credits to WSU by following the Ilitch School articulation agreement in place between the two schools, helping students maximize credits earned at JC while saving time and money in their pursuit of a WSU bachelor’s degree.

General business and management classes will be taught by Ilitch School faculty. To be eligible to enroll, students must apply to WSU using the online application at apply.wayne.edu. Once accepted, they can browse for classes and register at classschedule.wayne.edu.