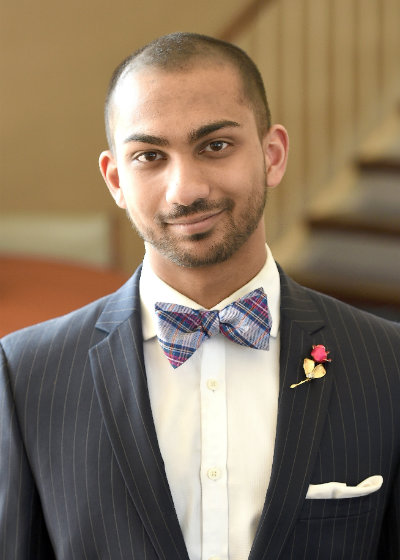 While taking nearly the entire pre-medical curriculum as well as courses toward his Global Supply Chain major, serving as a research assistant in Wayne State's Department of Biomedical Engineering, and maintaining membership in the Honors College, Viswanath Swamy has launched two ventures: the Live VLS fashion lifestyle blog, and Blanc, a line of luxury menswear. He credits early failures with teaching him tenacity and optimism, and inspiring him to pursue professional development to move forward with his passions toward success.

Live VLS, Viswanath's online blog dedicated to the arts and culture of Detroit, originally began with the art of menswear; he would take photographs of ensembles in various locations around the city. While the project did not gain traction as quickly as he planned, he chose to push forward, investing in camera equipment, attending media webinars and learning from those who were advanced in the blogosphere. Today, he has collaborated with the Detroit Institute of Arts in their annual FashBash event, Neighborhood SEEN magazine and, most notably, Coach Inc. The blog has a following of more than three thousand unique users and holds affiliate market collaborations with Nordstrom, Macy's, Saks Fifth Avenue and many others.

Viswanath says the greatest benefit of this success is the voice he has in the community. His platform's name means to live with versatility, liveliness and style, and he has been able to leverage his online presence to discuss global and local challenges, using Live VLS to instigate change.

His second project, Blanc Inc. is a luxury menswear line that sources fabrics from Europe and is being constructed at Detroit Sewn. Currently, the line's first products are being sampled. He named the company Blanc because it means white in French, a color symbolic of clean slates and second chances. This is pertinent because Viswanath is passionate about alleviating homelessness in Detroit, essentially giving people second chances. Once the sampling phase is complete, a percentage of each Blanc product sold will directly fund initiatives to eradicate homelessness in the city.

"The lessons I have learned have guided my pursuit of purpose," Viswanath says. "Although I cannot guarantee success, I can state now that every endeavor, passion, and thought is connected in some way. When one realizes that, the fear of trying something new dissipates, and the world simply becomes one large playing field."

Connect with Viswanath on LinkedIn