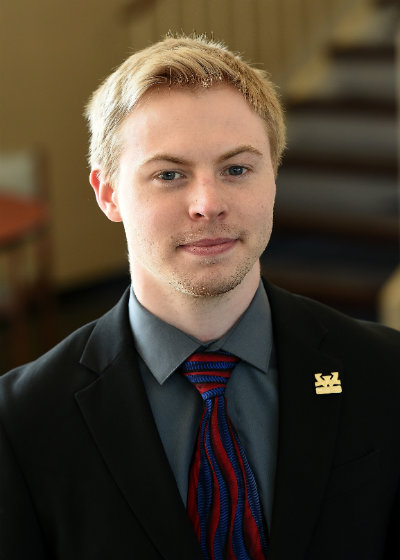 Robin Nickell has demonstrated significant dedication to leadership, community service, personal development and academic success. He credits his late friend Chelsea, who passed away at age 20 from osteosarcoma, with driving him to become a community leader and giving him the strength to accomplish his goals.

Robin is the men's Student Athlete Advisory Committee representative for the varsity fencing team and leads its Make-A-Wish fundraising committee. For two years running, he has earned the David Adamany Undergraduate Endowed Scholarship.

He enjoys sharing his expertise and teaching others interested in technology as the CMO of Wayne State's Information Technology Organization at Wayne State and as a writer for "The Brief" blog for the company GoCommando. Robin works at the Mike Ilitch School of Business as a student technology assistant and at Quicken Loans as a desktop support intern and campus ambassador.

Robin's most poignant achievement is spearheading a fundraiser for the very person that inspired him – his friend Chelsea. His efforts raised more than $19,000 that went toward her medical bills and other costs through creative events like potlucks and wine tastings, as well as outright donations. With this financial support, her family was also able to enjoy a much-needed stress relieving vacation to Puerto Rico, where Chelsa fulfilled a lifelong dream of swimming with sea turtles.

"It was not easy by any means to become a leader and to really impact the community in a big and moving way. It required a lot more time that what I could afford while working, fencing and taking classes at Wayne State full-time, but I made it work because it was for something greater than myself and it was what I needed to do," Robin says. "I could not have done this without Chelsea's strength and her family's encouragement."

Connect with Robin on LinkedIn