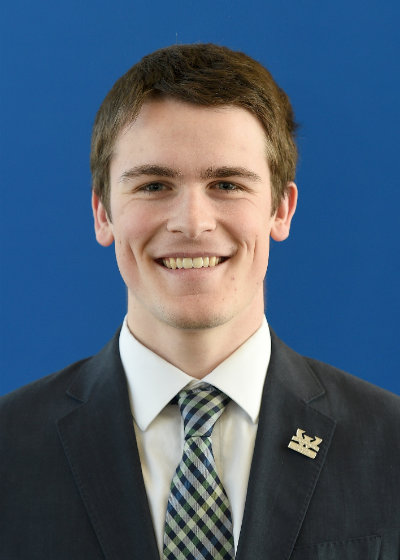 Jack Mazur credits his academic success and multiple scholarships to long days and nights studying. He received Wayne State's Presidential Scholarship when he entered the university, which he has maintained it with an exceptional GPA. He was also honored with the William L. and Lori Hurles Endowed Scholarship for a high performing upperclassman pursuing a Global Supply Chain Management degree. And, he has earned the distinction of being named to the Dean's List four out of his five semesters in the Ilitch School.

Jack has held multiple leadership roles while a student at Wayne State. He has served as vice president of the Student Association of Michigan (SAM), an organization encompassing all of the state's public universities that aims to foster the well-being of their students. Through SAM, Jack worked with the Wayne State Student Senate to represent the university on a statewide level. Since October 2016, Jack has served as director of human resources for the Ilitch School's Business Student Senate. He is also the secretary on the executive board of the Global Supply Chain Management Association.

During an internship at Expeditors, Jack led a project team of four students, and was responsible for delegating work and ensuring timely completion of the work under a tight deadline. He was also a team captain on a recent supply chain case competition in Denver.

Connect with Jack on LinkedIn