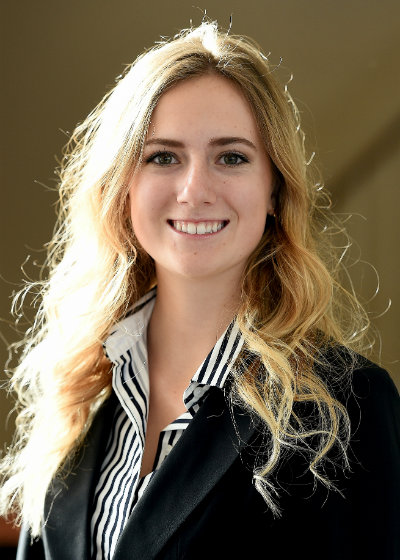 B.S. in Accounting, minor in Economics, expected May 2019

Brianne Lambrecht is only a sophomore at Wayne State, but she's already making waves. In her first semester on campus, Brianne joined the Business Student Senate, Beta Alpha Psi and the Delta Zeta sorority. She also attended as many accounting firm meet-and-greets as she could, as well as all the career fairs. She worked a part-time job at the campus Starbucks, volunteered with Gleaners Community Food Bank, and has maintained her status in the Honors College by achieving a 4.0 GPA every single semester.

Notably, Brianne's first career fair experience as a freshman helped build her network. Companies took interest in her drive as such a young student, and those connections have paved the way for opportunities. Even though accounting firms don't typically offer internships to freshmen, that didn't stop Brianne from applying to virtually every firm that provides one-day leadership events to acquaint freshmen with the profession and corporate culture. To date, she's attended PwC's Explore, Discover Rehmann, Plante Moran Expo and Clayton & McKervey's Reach Beyond Summer Program.

An inaugural member of the Warriors Business Community, Brianne took full advantage of the many professional networking opportunities it offered. She was invited to speak at an Ilitch School's Board of Visitors meeting, attend the GM Auto Show, and attend Inforum's fourteenth annual North American International Auto Show Breakfast.

Brianne recently fulfilled one of her dreams when she was accepted to the Disney College Program. She spent fall 2016 working in the parks full time while simultaneously learning about one of the world's most beloved and successful companies. She credits the experience with providing invaluable knowledge and growth in her confidence and skills.

Since her return to Wayne State, Brianne disaffiliated her association with Beta Alpha Psi to instead join Alpha Kappa Psi, the highly-regarded business fraternity. She took on a leadership role within the fraternity as the reigning president of her winter 2017 pledge class. She is also the new assistant to social chair within her Delta Zeta sorority.

"There's still so much ahead of me and a thrilling number of opportunities I plan on pursuing," Brianne says. "I can't wait to see where I am when I'm 25."

Connect with Brianne on LinkedIn