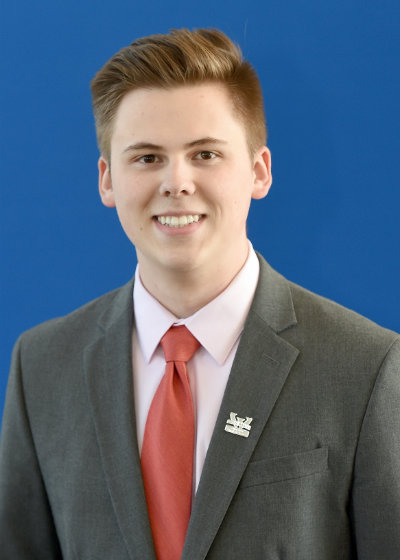 B.S. in Finance and Accounting expected May 2019

Just a sophomore double majoring in finance and accounting, Cosmin Dordea already has demonstrated success in academics and leadership at the Mike Ilitch School of Business. He has been involved with Alpha Kappa Psi, Wayne State's professional business fraternity, since his freshman year and was chosen to lead the organization's fundraising committee. After demonstrating a strong work ethic and earning the Brother of the Month award for March 2016, Cosmin was elected vice president of finance and has since created a transparent financial system for the fraternity.

As a peer mentor for the Introduction to Business course, Cosmin served as a role model for incoming freshmen. He delivered weekly, hour-long presentations to his learning community of 25 students in the form of interactive workshops aimed to improve skills in interviewing, networking, resume writing and more. He worked one-on-one with students to prepare for their first career fair, encouraging others to attend and network as early their first semester. His efforts paid off as three freshmen he mentored received internship offers.

Cosmin has made the Dean's List every semester at Wayne State with a 3.97 GPA while balancing a full-time internship at DENSO and already reaching junior standing as a sophomore. He was awarded the Jack Kuzminski Memorial Endowed Scholarship for strong academic ability as a finance major and was chosen as a Top Scholar on the Alpha Kappa Psi 2016-17 Academic Team.

"The Mike Ilitch School of Business has allowed me to pursue my future professional career at full force while giving back my community, and the best is yet to come," Cosmin says.

Connect with Cosmin on LinkedIn