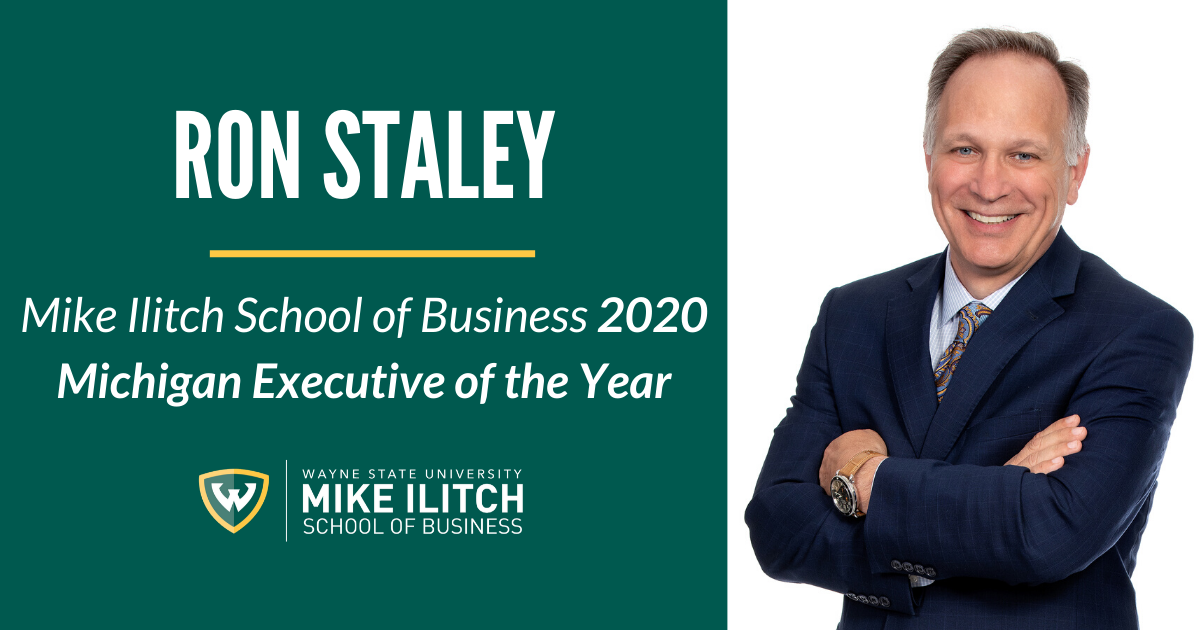 The Wayne State University Mike Ilitch School of Business has announced Ron Staley, senior vice president of southeast Michigan operations and historic preservation group executive director for The Christman Company, as the 2020 recipient of its signature Michigan Executive of the Year Award.

Established in 1999, the Michigan Executive of the Year Award recognizes an individual in a senior leadership position at a business, government or nonprofit organization that is based in or has a substantial presence in the state of Michigan. The primary criteria for selection of this award are recent or ongoing actions by the honoree and/or his or her organization that are likely to reflect positively on the state of Michigan and the disciplines researched and taught within the Mike Ilitch School of Business.

Staley is a 40-year veteran of planning and delivering some of the most complex and high-profile general contracting and construction management projects in Michigan. In addition to serving on The Christman Company’s board of directors and as senior vice president and principal in charge of Christman’s southeast Michigan operations, he is also executive director of the company’s historic preservation group, which he founded in 1992. His project leadership and expertise has led his group to national prominence with many award-winning projects providing construction services for high-profile national historic landmarks across the US and abroad.

In 2014, Staley led the relocation of Christman’s southeast Michigan group to the Fisher Building, which Christman constructed in 1928. Staley has provided leadership on recently completed notable projects that are reshaping the landscape of Detroit, such as the Little Caesars World Headquarters Campus Expansion, the Henry Ford Detroit Pistons Performance Center and Center for Athletic Medicine, and the Ilitch School’s state-of-the-art new home on Woodward Avenue.

Across the state, Staley has maintained a relationship at the Michigan Capitol, starting work there in 1986 and continuing with ongoing improvements for over 30 years. His preservation work, from historic Fort Mackinac to the Henry Ford Estate Fair Lane, has won awards and expanded Christman’s portfolio across the nation. He has been sought out to lead work on the U.S. Capitol as well as state capitols in Virginia, Maryland and Nebraska. Other notable projects include the preservation of Hemingway’s Finca Vigia in Havana, Cuba, and additional projects in Poland, Morocco and Slovakia.

Staley is currently lending his historic preservation expertise to Ford’s rehabilitation of Michigan Central Station, one of Detroit’s most iconic historic buildings, where the monumental train station and surrounding property is being redeveloped to create a new campus for Ford that will focus on developing new technology, including autonomous and self-driving vehicles.

With degrees in business administration/industrial management and civil engineering technology from Michigan Technological University, Staley is a frequent lecturer, professor and award-winning, peer-reviewed author. His numerous professional leadership affiliations include the Association for Preservation Technology International, the U.S. National Committee of the International Council on Monuments and Sites (US/ICOMOS), and the Michigan Historic Preservation Network. He also serves on industry advisory boards for Michigan Tech’s engineering and supply chain management and construction management degree programs.

Active on several community nonprofit boards, Staley has been honored as a Fellow with the Association of Preservation Technology International and as an Honorary Affiliate of the Michigan Chapter of American Institute of Architects. He was inducted into Michigan Tech’s Academy of Business and served as a three-time gubernatorial appointee to the Michigan State Historic Preservation Review Board.

For more information on this event or to view past winners, please visit ilitchbusiness.wayne.edu/about/awards.php.