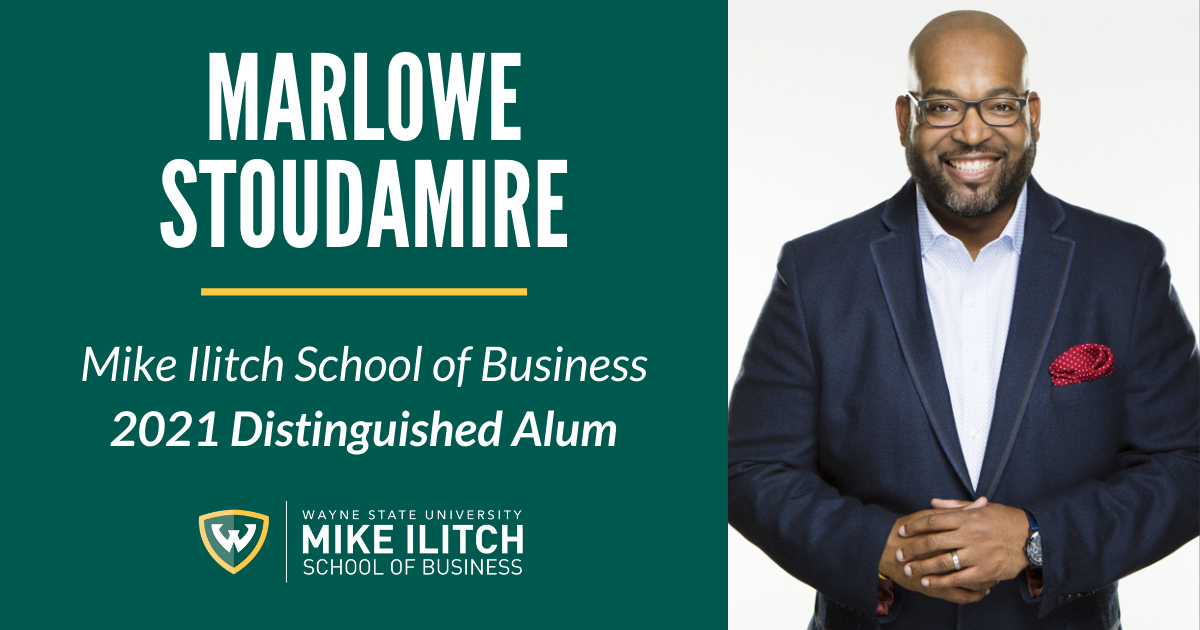 The Wayne State University Mike Ilitch School of Business has announced business strategist, entrepreneur and longtime champion of Detroit Marlowe Stoudamire as the 2021 recipient of its signature Distinguished Alumni Award.

Established in 1981, the Distinguished Alumni Award recognizes graduates of the Mike Ilitch School of Business whose exceptional achievements over a career in business, education or public service have brought honor and distinction to Wayne State’s business school.

A Detroit native and graduate of Cass Technical High School, Stoudamire earned a bachelor’s in information systems management from the Ilitch School in 2003. He would later go on to earn a master’s from Central Michigan University and attend Harvard Business School’s prestigious Young American Leaders Program.

Over the course of a career spanning more than two decades, Stoudamire served as a social capital expert, business strategist and thought leader in local and global business, and in philanthropy and social impact capacities for public and private sector organizations and diverse communities. He was the founder and owner of Butterfly Effect Detroit, a unique business consulting firm that focuses on social capital, which the firm defines as “… the cultural, economic or personal value obtained from relationships and experiences shared by people, communities and entities.”

Prior to launching his own business, Stoudamire served as chief of staff at the Skillman Foundation and project director of international business strategy at Henry Ford Health System with projects in China, India and Saudi Arabia. More recently, he led the Detroit Historical Society’s award-winning and ground-breaking Detroit 67 project. Stoudamire’s leadership, strategy and influence were the driving forces behind several high-profile projects across the region, including the JP Morgan Chase Detroit Service Corps, Detroit Public Television’s “One Detroit,” the economic-development focused Live 6 Alliance, and other major private- and public-sector initiatives.

Among the many honors and awards Stoudamire received during his lifetime, he was named a “40 Under 40” by both Crain’s Detroit Business and the Michigan Chronicle.

One of Stoudamire’s last projects before his untimely death in March 2020 was a partnership with the National Hockey League, the Detroit Red Wings, the Ilitch School and others, called “Learn, Play, Score.” The initiative’s goal is to bring hockey to more than 30,000 Detroit youth through street hockey at 79 schools and 12 parks and rec centers, hockey as a classroom tool, e-sports, scholarships for hockey programs, open skate sessions at Little Caesars Arena and more.

Stoudamire will be honored at the Ilitch School’s 41st annual Recognition and Awards Program on Thursday, Nov. 11, at the Roostertail. In honor of Stoudamire’s unwavering devotion to his family as well as his community, his wife Valencia Stoudamire and his two children will accept the award on his behalf. The Recognition and Awards Program is also where the Ilitch School celebrates the recipients of its Michigan Executive of the Year, Emerging Leader, Inspirational Teacher and Outstanding Student awards.

For more information on this event or to view past winners, please visit http://ilitchbusiness.wayne.edu/about/awards.php.