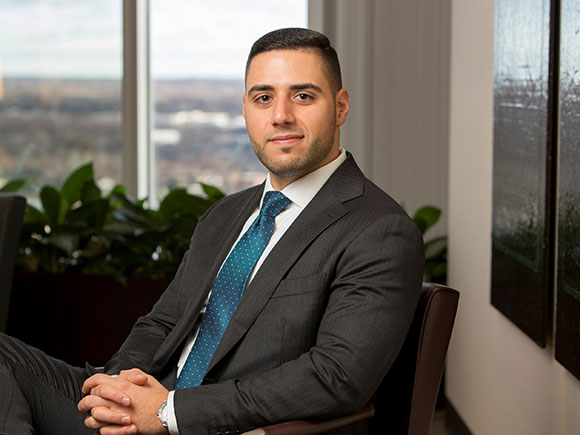 in 2012 and completed the Joint JD/MBA degree – offered in partnership with Wayne Law – in 2016. He is currently an associate in the corporate practice group at Jaffe Raitt Heuer & Weiss, a local full-service law firm where he focuses on mergers and acquisitions and commercial real estate transactions. Hanna, who was named to Crain’s Detroit Business “20 in their 20s” this year and to the Michigan Lawyers Weekly “Up & Coming Lawyers Class of 2017,” said he continues to use the skills he learned as an MBA student to inform his law career.

“Having a strong background in business helps me better understand my clients’ goals and how to best achieve them, while accounting for any concerns they may have about risks,” Hanna said. “It’s comforting for clients when they know that their attorney ‘gets it.’”

Hanna said he decided to pursue the joint degrees at Wayne State because he wanted to stay closely connected to the city of Detroit. “There is no better school to do that than Wayne State,” he said. “The network I was able to build while I was a student WSU has been invaluable for the early stages of my career as a Detroit-based business attorney.”

He is also active member in the community. He established and led an effort on behalf of his law firm that assisted people from metro Detroit’s Iraqi and Chaldean communities by providing them with proper legal representation while they addressed their immigration status, in an attempt to avoid unjustified deportation. Earlier this month, Hanna was featured in Crain’s Detroit Business for his efforts, as he spearheaded a team of over 20 attorneys and paralegals at Jaffe to provide direct representation for 16 people, and indirect assistance to over 200 people. His leadership on the project was particularly impressive because, as a corporate and real estate attorney, he had to quickly learn the complexities of immigration law.  Hanna is also a member of the Chaldean American Chamber of Commerce and the Association for Corporate Growth.

Hanna encourages students to start making connections early on. “Utilize all of the resources at your fingertips,” he said. “Opportunities only present themselves if you make yourself available to them. Focus on accomplishing small goals each day, and good things will come.”