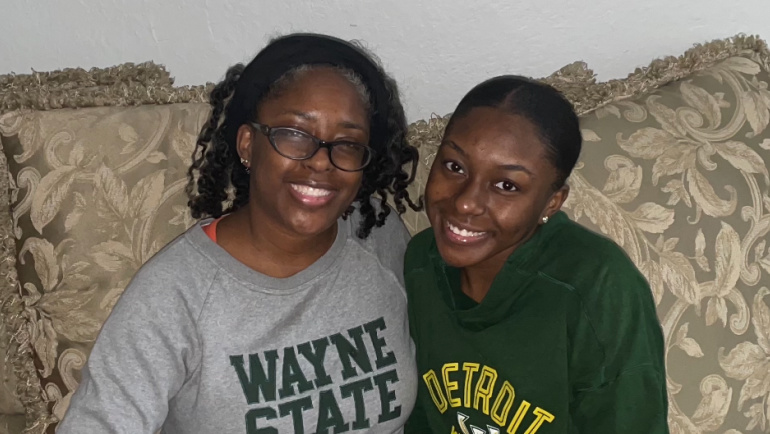 Elisha Little is a sophomore at Wayne State University, where she serves as a peer mentor and orientation leader and participates in a variety of other student programs and organizations. A 2019 graduate of Cass Technical High School, Little has lived in Detroit her entire life — just like her fellow business student Porshe Anderson. Detroit natives and current residents, Anderson and Little have a lot in common with one another. But while classmates often bond over similarities, Anderson and Little’s peer relationship isn’t exactly typical: They’re mother and daughter.

Studying at the Mike Ilitch School of Business, Anderson is an information systems management major, while Little is pursuing a marketing management degree.

“We’ve always been close, but after sharing this experience, I’ve come to see my mom in a different light,” said Little. “My mom has seen me through everything, and being students together has ultimately brought us closer.”

Wayne State has served the Anderson-Little household in many different ways. In addition to attending classes, Anderson works for the university full time as an accounting assistant. She earned an associate’s degree from another university, but when Little was a senior in high school, a Wayne State co-worker convinced Anderson that it was time to go back to school.

“She told me to stop making excuses, and I knew it was time to take that big leap,” said Anderson.

She’s scheduled to graduate in winter of 2022, one semester before her daughter graduates with a bachelor of science degree of her own. One of Anderson’s main reasons for returning to school was to open more professional doors for herself once she obtains the necessary credentials for moving up in her field.

Anderson was already enrolled at Wayne State as Little was deciding which college she would attend, but Little insists that her mom didn’t influence her choice of higher education institution.

“I did my research, and I looked around at a variety of schools, but in the end, I felt most connected to Wayne State. They’re the school that always made a point to be active at Detroit Public Schools, and with all the growth and change happening within the city right now, it only made sense to stay,” said Little.

Little hopes to enter the sports marketing field someday, with aspirations of running the social media platforms for a professional team. She sees Detroit as the perfect place to jumpstart her career.

Little and Anderson have learned a lot from one another in the process of living, studying and functioning together. While they have yet to be enrolled in a class together, they have shared tips, tricks and advice about coursework, professors, class material and resources. They’ve also gained a deeper level of respect, consideration and admiration for each other in the process.

Anderson said, “she sees me as not only a single mom, not only working, but also going to school. With all the sacrifices that I’ve made so we can further our educations together, it says ‘this is not only my mom, but my mom as a person, who is doing what it takes to better our lives together.’”

As dynamic as Anderson and Little are as housemates and peers, they’ve faced their fair share of tense moments, especially during midterm and finals. More than that, they’ve had to work through their differences under a unique circumstance, where the lines of parent and child get blurred amidst being college students together.

Anderson said the hardest part is giving her daughter room to make her own mistakes, as any young adult needs to do in order to learn from them.

“As a parent, you try not to interfere as much as you would when they were in high school. You try to give them more freedom and that chance to grow. I have to believe I did my job as a parent for her to make sound decisions for herself,” said Anderson.

Even with their tight connection and supportive relationship, Anderson and Little still make sure to have their own individualized experience at Wayne State. Little prefers daytime classes and has found her place by getting involved in a list of extracurriculars. In contrast, Anderson signs up for night classes that fit with her full work schedule. The occasional check-in has kept them in contact during the day in previous semesters — enough to be confused for one another while roaming campus.

The mother-daughter duo both put everything they can into this unique situation, where they are working hard not only for themselves, but for one another and what they want their futures to entail.

“We were already very close, but after seeing her go through different struggles and triumphs to get us where we are today, I’ve never felt closer to you, mom,” said Little.